Situated on the Old Khami road 22 kms West of Bulawayo

Excavations seem to show that the site was not occupied after these Rozvi took over. The Rozvi made another Khami phase site Danamombe, (Dhlo-Dhlo), their new capital. In the 1830s Nguni speaking Ndebele raiders displaced them from Khami and many of the other sites they had established.

The site of Khami reveals seven built-up areas occupied by the royal family with open areas in the valley occupied by the commoners. The complex comprises circular, sometimes terraced, artificial platforms encased by dry stone walls.

The beautifully decorated 6m-high by 68m-long retaining wall of the precipice platform bears a checkerboard design along its entire length. The platforms, rising 2–7m above the ground, carried dhaka (clay) huts and courtyards where those of lower status lived.

The remnants of cattle kraals and huts for ordinary people can be seen below the Hill Complex. The ruins include a royal enclosure or Hill Complex, which had to be on higher ground than other buildings, stone walls and hut platforms and also a Christian cross  believed to have been placed by a contemporary missionary.

There are also ruins on the eastern side of the Khami River. Other platforms are believed to have been cattle kraals and a retaining wall with a chequered pattern. Recent excavations (2000–2006) have revealed that the walls of the western parts of the Hill Complex were all decorated in chequer, herringbone, cord, as well as variegated stone blocks 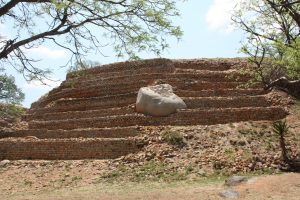 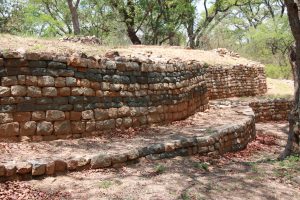 Khami Ruins is a National Monument and as such there is no accommodation on the 108 ha site however there are a number of hotels and B&Bs in nearby Bulawayo.

There are also daily direct flights  from Johannesburg and other centres. Check with your travel agent

Taxis and hire cars are available from the airport

Lodges can pre-arrange pick-ups for a fee.

Visitors can self-drive to Khami.

It is highly recommended  that visitors arrange a tour to Khami in order to get the most from the visit.

Guides are available at the Park office.

“The architectural is amazing I felt like I was a princess a warriors QUEEN walking around there , for some reason I didn’t believe my eyes me and my friend we were speechless we stayed the entire day walking around taking our time amazed by the beautiful architectural”

“Amazing place, a large old ruin town in a place near to nowere. Made my fantasy spin, imagining what life must have been like here some 500 (!) years ago. You will get a basic guided tour for your entrance fee, which can be improved if you tip.

“For history lovers and those who appreciate evolution this is an interesting place to visit as it takes your imagination back to the iron age. The road to the site is not well mantained at times you might think that you are lost but keep going as directed. The stone work is amazing the guide who took us around was energetic and explained well. You will have a chance to exercise your imagination as you will be taken back in time with the history and the remains of this once powerful hub. At the site there is also a place to rest and you can bring your braai packs and enjoy braaing after the tour.”