Situated in the North West of Zimbabwe in Hwange National Park

Nehimba Lodge is situated on a large 278 sq-km private concession in the northern part of Hwange National Park. It combines luxury living, ultimate elegance and African charm to provide guests with an exceptional safari experience.

Nehimba offers seven spacious canvas under thatch tents which are built on teak decks. Together with the guest lounge area they overlook the magnificent lodge pan, which is frequented by large numbers of elephants, particularly in the dry season.

Nehimba sits firmly on the edge of the mopane woodlands associated with the north of the park and the kalahari sandveld of the south and west. All the diversity of Hwange’s fauna and flora is within easy reach. No two days are the same at Nehimba and game viewing experiences are tailor-made to our guest’s preferences, including game drives, walking safaris and night game drives on our private concession in search of nocturnal species of wildlife.

Whether guests choose to track a herd of elephant on foot with an experienced guide at dawn or spend the afternoon relaxing overlooking the waterhole on the deck by the pool, this wild and unspoilt bush paradise will guarantee that guets leave with memories to last a lifetime! 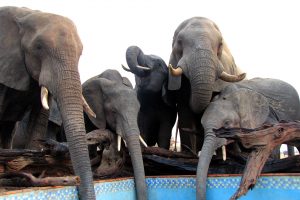 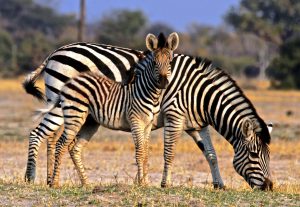 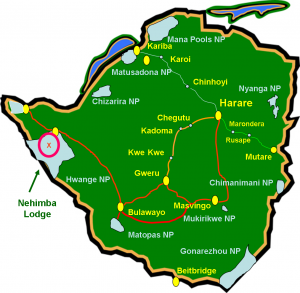 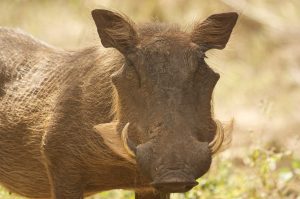 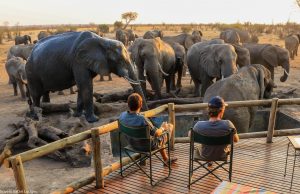 Nehimba is situated on its own private estate within the national park and wild animals including lion, leopard, buffalo and hyena wander freely through the area.

Enjoy a steaming cup of coffee on your private balcony at dawn or relax on the guest area deck with sundowners, observing the many different animals that pass in front of the lodge and quench their thirst at the waterhole.

All day game drives with a packed lunch and snacks in traditional open safari vehicles.

Conducted by a fully licensed and highly experienced professional guide.

Usually undertaken in the mornings and ideal for photography of big game on foot.

For those guests who would like to view Hwange in an entirely different ‘light’, Nehimba offers guests the opportunity to accompany one of the guides on a night drive within the concession.

Filtered spotlights are used to pick out the various nocturnal species that can be found such as hyena, porcupines, civets, genet cats, and if you’re lucky, perhaps even a leopard on a hunt!

Situated close to camp, this platform is the perfect spot to marvel at the splendour of an African sunset which provides the perfect back drop to the abundance of wildlife that comes to drink at the day’s close.

This is a special designated conservation area and is one of the few year-round, naturally occurring sources of surface water in the massive Hwange National Park.

The seep is an ancient source of water that was once used by the San bushmen. Today elephant visit the seep to dig for minerals and water.

By road from Victoria Falls: 1.5 hours on tar followed by 2-3 hours through the park.

Self drives via Main Camp: Follow the main tar road Southeast from Victoria Falls to Bulawayo. At the 264 km peg, follow the signs West to Hwange Main Camp. Once you enter Hwange Main Camp, Nehimba is approximately 58km down the narrow tar Sinametalla Rd. You’ll pass Guvalala Pan, White Hill Pan, and eventually come to Danga Pan. At the Danga sign, turn left and follow the road about 2km to Nehimba Lodge.

Guests can fly into Victoria Falls and transfers can be arranged. It is approximately 170kms (106  miles) to Nehimba Lodge

Alternatively guests can fly into Bulawayo and it is approx four and a half hours, 351 kms (219 miles) by road to Nehimba Lodge. Guests can do self drive or a transfer can be arranged for a fee.

Guests can drive to Nehimba Lodge but off the main roads a 4WD is definitely recommended.

Hwange Airport: It is only a 35 minute flight between Victoria Falls Airport and Hwange National air field.

Victoria Falls Airport is approximately 22 kms out of Victoria Falls Town and 170kms (106 miles) from Nehimba Lodge. Pick ups from the airport can be arranged  with local transfer companies at an additional cost.

Guests can fly into Bulawayo and it is approx four and a half hours, 351 kms (219 miles) by road to Nehimba Lodge. Guests can do self drive or a transfer can be arranged for a fee.

Hwange became the royal hunting grounds to the Ndebele warrior-king Mzilikazi in the early 19th Century.

Hwange is the largest Park in Zimbabwe occupying approximately 14 650 square kilometers. It is located in the northwest of the country about one hour south of the town of Victoria Falls.

Hwange boasts a tremendous selection of wildlife with over 100 species of mammals and nearly 400 bird species recorded. The elephants of Hwange are world famous and the Park’s elephant population is one of the largest in the world. The Park has three distinctive Camps and administrative offices at Robins, Sinamatella and the largest one at Main Camp.

Hwange has two main seasons, one hot and wet season starting in mid November and ending in mid April. This is the season for migratory birds in Hwange ranging from the inter-African migrants like the Southern Carmine Bee-eater to the Palearctic Migrants like the Amur Falcons and the Ruff. The number of bird species found in Hwange exceeds 400 and this is largely due to migrants that take advantage of the huge numbers of insects and favourable conditions during the wet season.

The second season in the cold and dry season starting off in about mid April and ending when the rains break in mid November. The low temperatures occur for a brief period in May/June and July and then it remains dry but get progressively warmer as the season progresses. Summer temperatures can reach into the 40s whilst winter overnight lows can be in the minuses but normally for only short periods. Hwange is on the edge of the Kalahari desert and as such we see a number of desert specialist birds in this dry period such as Sand grouse, Coursers and Nightjars.

Animals: The Dry season (from July to October) is the best time for game viewing when animals gather around predictable water resources.

Birds: Over 400 species have been recorded in Hwange which has the largest occurrence of birds in Zimbabwe.

Migratory birds are present from November to April. There are two main birding areas: the one around Main Camp and one to the north of the Park, around Robins and Sinamatella Rest Camps. Both areas are linked by a network of roads which take visitors through a variety of habitats, including many waterholes that attract large numbers of animals and birds.

Hwange experiences a mild to warm climate. The warmest months are September to March, while May to August are the coolest.
Temperatures can vary from 1 degee in winter to 45 degrees in summer, but generally average highs and lows are more moderate.
The Dry season occurs in April through October and brings fine, fair weather with plenty of blue sky.
The Wet season occurs from November to March and consists of showers in the afternoon followed by clear, sunny skies. On occasion It can remain cloudy with light showers for a few days.
Winter is regarded as the dry season and summer the wet season.
Dry season – April to October – Winter
April – Generally this is the month when the rains diminish and temperatures are falling bringing to an end the Wet season.   The evening / night time temperatures can drop rapidly and it is necessary to wrap up warmly particularly when on early morning and evening game drives.
May, June, July, August – These are essentially the winter months with temperatures rising in late August, early September.
Given there is no winter rain it is a very dry time of year and many of the waterholes which are not serviced with boreholes will dry up. The lack of water and sparseness of the vegetation generally makes it the best time for game viewing.
Daytime temperatures are around 26°C/79°F, but it gets very cold at night with average temperatures of around 7°C / 40°F.
September, October – The dry weather continues, but is broken up by the first rains which generally occur in early to mid November.
The change to the bush is almost immediate and new vegetation growth is clearly visible within a few days.
Daytime temperatures rise to 30°C+ quite quickly. October is the hottest month of the year and temperatures frequently rise to over 40°C.
Wet season – November to March – Summer
November – This brings a start to the rainy season and it is common for heavy rain to occur with plenty of thunder and lightening which makes for spectacular viewing. November remains very hot and daytime temperatures average around 32°C.
December, January & February – These are the wettest months of the year and whilst it may rain often the rain maninly occurs in the afternoons and will then clear.  It rarely lasts the whole day. Daytime temperatures average 29°C while night and early morning temperatures average 17°C.

“Words cannot describe how unbelievable this place is. The game drives were excellent along with the guide’s knowledge on everything. The guide walks were excellent. The room was very luxury! The room included a huge bed, a bathroom, and an outside shower …  I felt comfortable and safe. The food was delicious and never ending. I cannot wait to go back!.“

” I cannot say enough about this amazing lodge, the staff and the entire safari experience at Nehimba. Our guide Brendan was great!! It was always an adventure when we were out on our game drives with him… Whether spotting several dozen lions in one day, approaching wild dogs after a kill…The food was amazing.”

“…a fantastic place to go to. First of all I had a very good guide… we saw an incredible lot of game, even one time a pride of 16 lions! Of course lots of elephants as well…Nehimbe is situated in a beautiful part of the park and really in the bush. Perfect food. Staff really do take care of you very well. Highly recommended! “

“We spent three days in October …during the dry season. It was just perfect! Hundreds of elephants and other animals….We love our stay every minute. The family accommodation was stunning very nice and comfortable. It was a real adventure for all of us. The staff at Nehimba is wonderful very well trained … The food was nice and tasty. We still have nice dreams about Nehimba…..We would love to go back another time”

“We stayed at Nehimba for 3 nights as part of our safari holiday and WOW – what place. We are seasoned safari goers and have stayed in some ‘wild’ un fenced places but this was fantastic. Elephants EVERY day come into camp to drink from the waterhole along with buffalo, and on one occasion 4 wild dogs! The evening is when it comes into it’s own with elephants everywhere – there are lots and they all come to drink from the camp swimming pool!!!.”

“… we were not prepared for the experience we had at the Nehimba Lodge. …Nehimba is really excellent. Its far away from the entrance, real isolated, has its own waterhole in front of the lodges and during dry season we had more than 45-50 elephants, buffaloes, hyenas, lions and many others literally around us. Lions were sleeping under our lodge during night; the elephants were playing all day long with the small swimming pool of the lodge…the staff was friendly and helpful, the food was very good and tasty, and the guides very knowledgeable. “