Situated 256 kilometres from Harare off the Mutare / Juliadale road

Inn on Ruparara is located in Juliasdale and is surrounded by natural vegetation and the scenic beauty of the Nyanga mountains. Vistas of blue, gold and green African Highveld stretch before you at every turn. Granite mountains and hillsides covered with indigenous woodland provide for a truly exquisite setting.

Opened in September 1997, Inn on Rupurara was developed from virgin bush in a rocky and wooded valley and thus provides guests with a unique offering of attractions and amenities. The style of the building is Cape Country and has been built using local stone and wood, all under green corrugated iron roofing to blend into the local scenery.

A few kilometres away is ‘Rupurara’, the so named granite mountain which means ‘bald man’s  head’ in the local dialect. Surrounding the inn is an estate that is stocked with wildlife, while a spectacular drive down to the Nyangombe river takes visitors to the estate’s own trout farm.

Further afield lie all the attractions of the Nyanga district and Rhodes Nyanga National Park. Attractions include the beautiful mountains, waterfalls, lakes, rivers, ancient historic village ruins, golf courses and a casino. The splendid isolation of the inn is one of its key attractions and members of the public may only visit if booked in or if coming under reservation to enjoy a meal. This  means  all  its  delights  are reserved for its guests, who can relax and make the most of all it has to offer.

Meals are enjoyed in the well appointed dining room or on the patio, while drinks can be taken in the wine bar or enjoyed on the terrace or guests can relax in one of two lounges and read or play board games. One of the lounges has a bay window offering beautiful views of the surrounding mountains.

Since its opening Inn On Rupurara has won a number of awards, including the prestigious Best Country Resort Award from the Association of Zimbabwean Travel Agents. These awards are based on nomination and voting among members of AZTA across the country. The Inn on Ruparara has built up an enviable reputation for its cuisine over the years and despite some very difficult trading periods due to the country’s wider economic problems it has been able to maintain a very good standard and remains a firm favourite with local and international visitors to Nyanga and the Eastern Highlands. 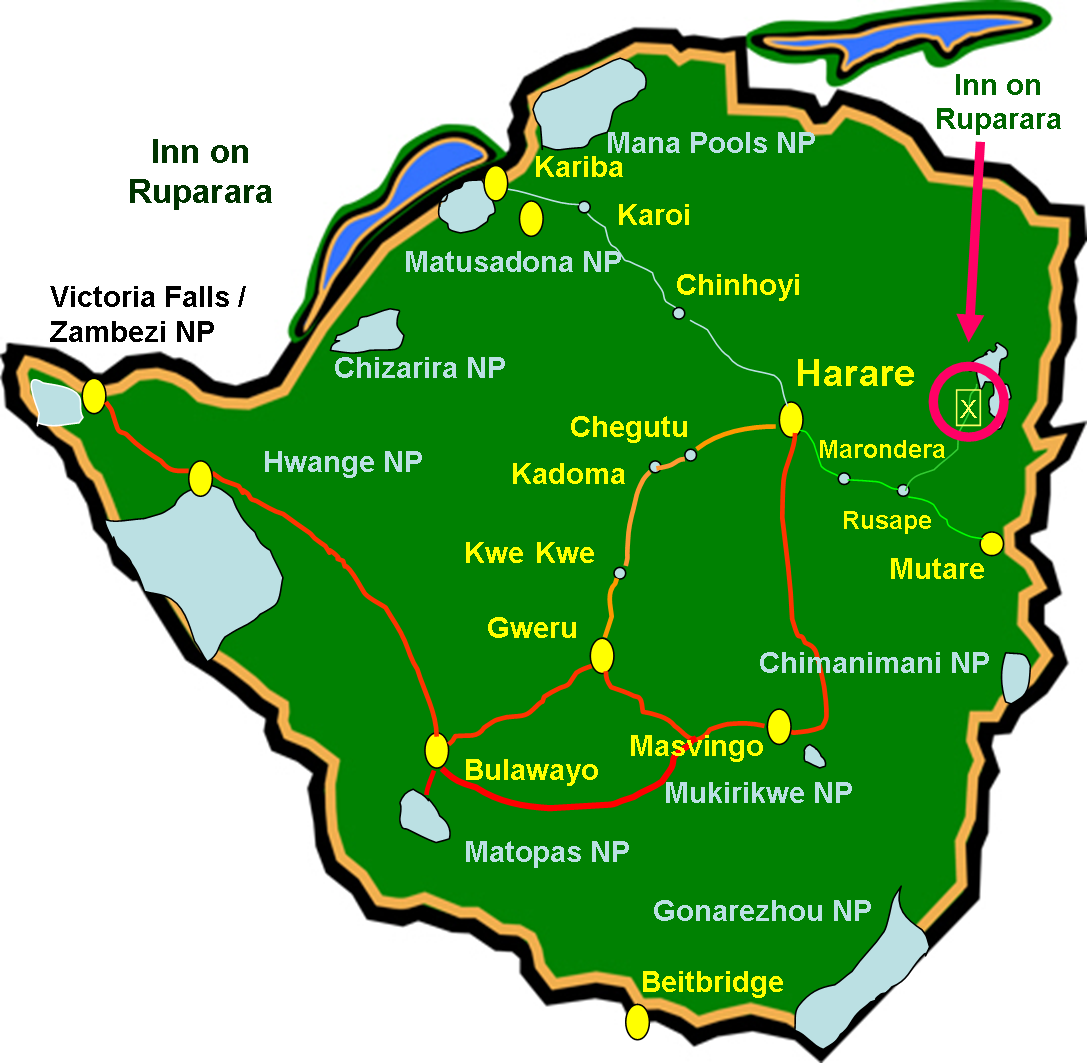 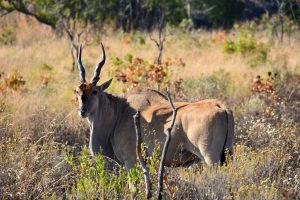 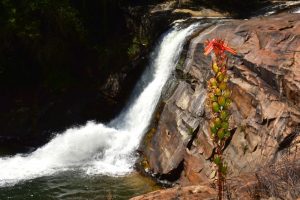 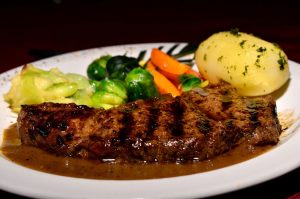 The Inn has a total of 18 beautifully constructed lodges and rooms, with a capacity of 36 guests. Six of these – the Waterfront suites – overlook a superb water feature nestling in the valley. The Valley View suites provide guests with spectacular views of the local mountains and valleys with their abundance of Msasa trees and local wildlife.

All rooms have en-suites and are tastefully decorated in an early Cape style which is in keeping with the country setting. They all open onto a generous covered veranda. Room heaters are provided for those chilly mountain evenings.

Lodges 1 through 6 are single standing units, with a cream and lavender theme. Whilst Lodges 7 through 18 are semi-detached, decorated in richer shades of gold, maroon and green. These lodges are perfect for families with children, having a twin bedded room adjacent to a double bedded room and two of the units have inter-leading balconies.

A limited number of cots and mattresses are available for guests who wish to have younger children in their room.

These include the two lounges both which have fireplaces, Trevor’s Wine Bar, a sauna and splash pool and a conference room for up to 18 people.

The dining room can seat a maximum of 40 people at one sitting. Breakfast is served from 7.30am to 9.00am, and on a sun-filled morning guests can eat out on the main veranda.

Dinner is a four course meal with a selection of two main courses and two desserts and is served from 7.00pm to 9.00pm, followed by tea or coffee in the lounge.

The hotel is built on a mountain slope, and whilst not being terribly steep, there are numerous stairs and very little even ground so the elderly and / or infirm need to be careful.

The Inn On Rupurara is located 5 minutes from Juliasdale, three kilometres off the Juliasdale / Nyanga road and is an easy three hour, 259 kms (162 miles) drive from Harare on good tar roads.

The area is noted for its leisure and sporting amenities and facilities, including golf at the Claremont course, horse riding on Rupurara Estate, scenic walks, trout fishing, game viewing and birding, and the Inn is within easy reach of local visitor attractions, including waterfalls, two golf courses and a casino.

Further afield in the Eastern Highlands are other attractions:

The local birdlife is extensive and makes the area a particularly rewarding destination for ornithologists. The variation in the Eastern Highlands terrain attracts different species of birds to specific areas. In the forests the lesser known Chirinda Apalis and Roberts’s Warbler can be seen whilst other forest birds include the Orange Ground-thrush, White-starred Robin, Swynnerton’s Robin, Red-capped Robin-chat, Stripe-cheeked Greenbul, Barratt’s Warbler, White-tailed Crested Flycatcher, Yellow-throated Woodland-warbler, Barratt’s Warbler, Olive and Black-fronted Bush-shrike.

Red-faced Crimsonwing can be seen in the brush and in the more open bush areas the Yellow-bellied Waxbill is common and the Livingstone’s Turaco can also often seen and heard. Orange-winged Pytilia can be found in the more open habitats as can the Swee Waxbill in the western parts of Nyanga. Wattled Crane also breed in the area.

The mountains are important for the rare Taita Falcon and summer brings Blue Swallows to the montane grasslands to breed. The miombo woodlands produce Whyte’s Barbet, Miombo Tit, Rufous-bellied Tit, White-breasted Cuckooshrike, Miombo Double-collared Sunbird, Broad-tailed Paradise-whydah and Black-eared Seedeater, whilst the acacia can be searched for the elusive Ashy Tit.

A check on the skies is always a good idea in this area, particularly around escarpments and Scarce Swift, African Black Swift, Mottled Swift, Eurasian Hobby, Peregrine Falcon, Augur Buzzard and Verreaux’s Eagle can be seen and in open grassland you could find Secretary birds, Pallid Harrier, Moustached Grass-warbler and Striped Flufftail.

Garden areas attract a wide variety of birds including the Bronzy and Malachite Sunbirds on flowers.

Fly fishing is very popular in the Park’s rivers and dams. Lake Gulliver and the Mare, Udu, Purdon and Rhodes Dams have been stocked with trout from hatcheries maintained by the Department of National Parks. The Rainbow trout is most widespread within the park’s dams and streams but Brown trout and the American brook trout are also present.

Mount Nyangani  (formerly known as Mount Inyangani) is located in the Nyanga National Park and is situated in close proximity to Juliasdale.

The area is very popular with walkers and ‘outward bounders’ and climbing Mt Nyangani is on many visitors ‘to do’ list. Depending on individual fitness the walk will generally take between 1½ to 3 hours.

Whilst the walk does not require rock climbing it is still a relatively steep climb and it is recommended that people with health conditions, injuries or who are out of condition  should not attempt it.

The ascent is tiring and the decline is strenuous and hikers need to be careful of loose stones. It should not be attempted after rains.

Annual rainfall totals are high (around 2200 mm) but long spells of dry weather occur during the winter period of May to August which generally makes for ideal walking conditions as it is quite cool.

It is essential that you have the correct footwear which should not be loose. You will also need to take water and it is recommended that you take something to snack on. It is advisable to take a camera.

When climbing Mt Nyangani visitors need to be very aware of prevailing weather conditions and should seek local advice. The weather can change very quickly from sunny skies to thick fog and visibility will be severely impacted. It is easy to become disorientated and to loose direction, so is potentially very dangerous.

Under fairly severe conditions a number of fatalities have occurred over the years.

The summit lies atop a small outcrop of rock around 40 metres above the surrounding area. The remainder of the peak is a broad moor of mainly rolling hills and plateau covering an area of about 8 km2.

There are excellent views to be had and on a clear day there are many good photographic opportunities. The edges of the plateau fall steeply away to the east and west sides.

Three rivers have their sources on Mount Nyangani: the Nyamuziwa River, the Kairezi (Gairezi) River and the Pungwe River. The first two are tributaries of the Mazowe River, which is itself a tributary of the Zambezi River. The Nyama River, a tributary of the Kayirezi, falls off the main plateau in a waterfall on the northeast of the mountain and the Kairezi Falls are located on the east edge of the main plateau.

The Eastern Highlands’, which includes Juliasdale, is the mountain range in the east of Zimbabwe and one of four distinct physiographic divisions on the African continent.

They extend for approximately 300 kms (190 mi) along Zimbabwe’s eastern border with Mozambique.

The range comprises three main mountain groups – Nyanga (to the north) which contains Zimbabwe’s highest mountain Mount Nyangani, Africa‘s second-longest waterfall Mutarazi Falls and the Honde Valley which leads into Mozambique; Bvumba Mountains (centrally situated near the city of Mutare); and Chimanimani (to the south).

These regions are all sparsely populated, highland country and are covered in rich grassland and forests.

The Highlands have a more equable climate than Zimbabwe’s central plateau, with higher rainfall, low cloud and heavy mists and dew as moisture moves inland from the Indian Ocean.

Many streams and rivers originate in these mountains, which form the watershed between the Zambezi and Save River systems.

Much of the area consists of rolling hills covered with grassland, which are renewed annually following the fires that occur at the end of the dry season.

Some valleys and east-facing slopes contain areas of tropical rainforest, with a high canopy and a rich undergrowth.

There are larger areas of dry forest at higher altitudes in places where the ground is well watered and on drier slopes patches of miombo woodland and areas of heathland at higher elevations. There are patches of the tall evergreen Mobola Plum near the town of Chipinge and on the western slopes of the Nyanga Highlands. A number of indigenous monocot lilies with small distribution ranges occur in these mountains such as Cryptostephanotis vansonii, Cyrtanthus rhodesianus, Scadoxus pole-evansi to name a few.

“Sean thank you for sharing Camp Amalinda with us…what a setting…the rooms, the food, the staff …will definitely return…”

“Warm welcome with refreshing orange juice. Comfortable accommodation and superb meals. Really felt at home and enjoyed the variety of meeting places – around the swimming pool, at the bar, around the camp fire at night. We were privileged to have Kevin share his knowledge of the bush with us, and tracking the rhinos was a highlight. Besides trips to bushman paintings and Matopos, Kevin obliged by taking us to Maleme  Dam. So impressed with the work being done in the community”.