Situated in the North West of  Zimbabwe in Hwange National Park

Somalisa Expeditions is a premium safari camp offering an authentic, safari experience in Hwange National Park. It is a sister camp to Somalisa Camp and Somalisa Acacia.

Somalisa Expeditions’ main area includes a lounge and dining area on raised decking which overlooks a small pool, which elephants have become habituated to drinking out of. Add to this, the water hole is frequently used as a ‘mud-bath’ and a popular rendezvous for the elephants. The close up encounters with elephants will provide numerous photographic opportunities with these majestic animals.

Consisting of six elegantly furnished, pristine Serengeti-style tents, each tent has en suite bathroom facilities including flush toilets and running water. Activities include guided walks lead by qualified and passionate guides who will share their knowledge and love of the bush with you, game drives and night drives. Wildlife sighting include elephant, kudu, sable antelope, zebra, wildebeest, gemsbok, the rare and endangered roan antelope, buffalo, giraffe, lion, leopard, hyena and many other wildlife species. 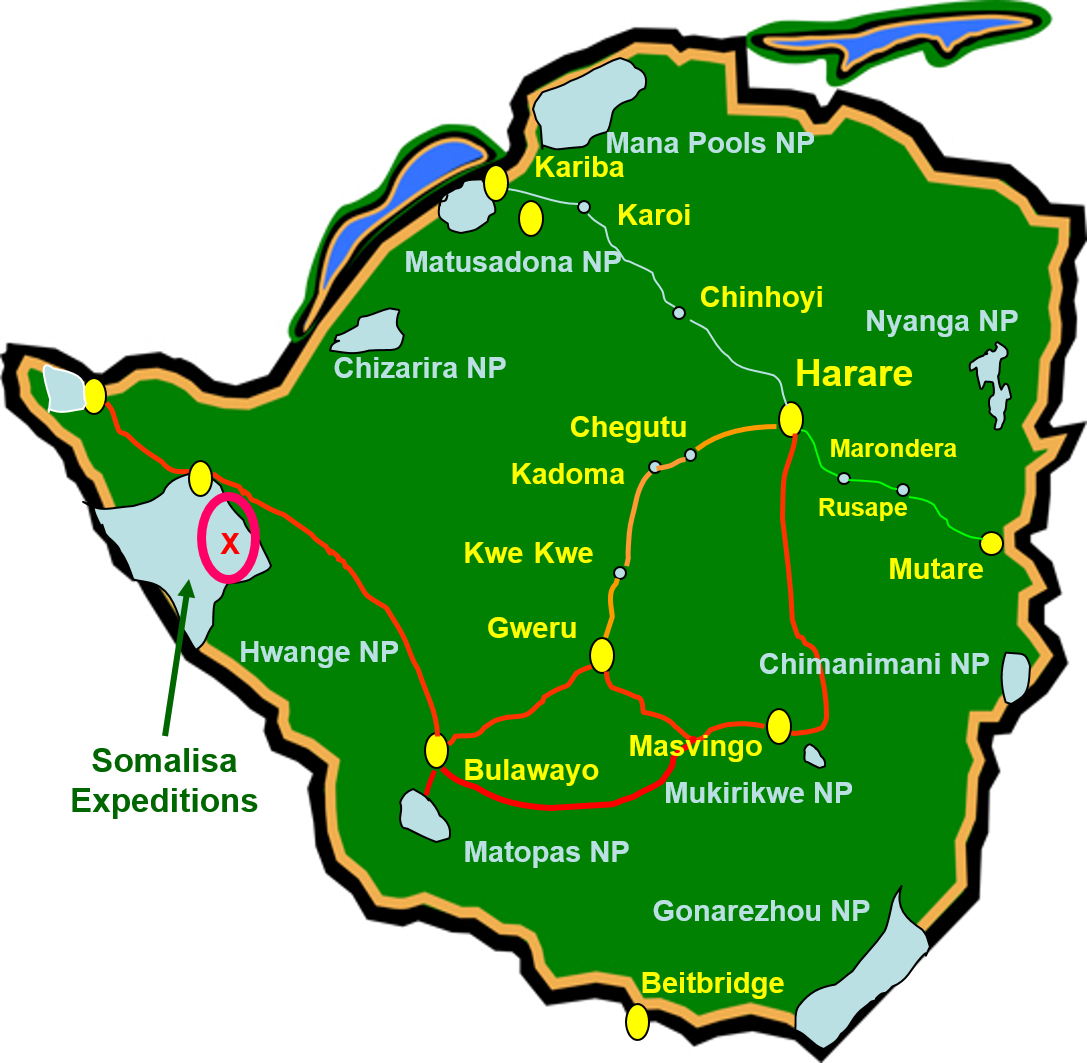 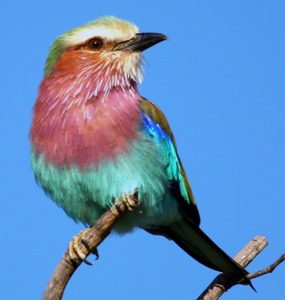 Somalisa Expeditions’ main area includes a lounge and dining area on raised decking which overlooks a small pool, which elephants have become habituated to drinking out of. Add to this, the water hole is frequently used as a ‘mud-bath’ and a popular rendezvous for the elephants

Zimbabwean guides are recognized as being amongst the most highly trained and knowledgeable in Africa. Walking safaris were perfected in Hwange and Somalisa Expedition’s guides offer guests the opportunity to view wildlife close up on foot.

From big game viewing to examining the lowly ant-lion, this is a unique and fascinating way to see Hwange. Game drives allow guests to cover vast distances and see the diversity of the park as well as come across a plethora of wildlife.

In addition to experiencing the park, guests are encouraged to sit and enjoy the game that moves through the area close to camp.

Guests can fly into Victoria Falls and transfers can be arranged. It is approximately a three and a quarter hour road trip, 232kms (145 miles) to Somalisa Expeditions Camp.

Somalisa Expeditions Camp is a little over an hours drive from Hwange Main Camp.

Alternatively guests can fly into Bulawayo and it is approx four and a half hours, 349 kms (218 miles) by road to Somalisa Expeditions Camp. Guests can do self drive or a transfer can be arranged for a fee.

Guests can drive to Somalisa Expeditions Camp but off the main roads a 4WD is definitely recommended.

Manga Airstrip: Situated in the heart of Hwange National Park. It is only a 30 minute drive from Somalisa Private Concession where Somalisa Expeditions, Somalisa Camp and Somalisa Acacia are located.

Hwange Airport: It is only a 35 minute flight between Victoria Falls Airport and Hwange National air field. Somalisa Camp is 150 kms (94 miles) or approximately 2 hours and 20 minutes from Hwange airport. Transfers can be arranged

Victoria Falls Airport is approximately 22 kms out of Victoria Falls Town and 232 kms (145 miles) from Somalisa Camp. Pick ups from the airport can be arranged by Somalisa Expeditions or with local transfer companies at an additional cost.

Guests can fly into Bulawayo and it is approx four and a half hours, 349 kms (218 miles) by road to Somalisa Camp. Guests can do self drive or a transfer can be arranged for a fee.

Hwange became the royal hunting grounds to the Ndebele warrior-king Mzilikazi in the early 19th Century.

Hwange is the largest Park in Zimbabwe occupying approximately 14 650 square kilometers. It is located in the northwest of the country about one hour south of the town of Victoria Falls.

Hwange boasts a tremendous selection of wildlife with over 100 species of mammals and nearly 400 bird species recorded. The elephants of Hwange are world famous and the Park’s elephant population is one of the largest in the world. The Park has three distinctive Camps and administrative offices at Robins, Sinamatella and the largest one at Main Camp.

Hwange has two main seasons, one hot and wet season starting in mid November and ending in mid April. This is the season for migratory birds in Hwange ranging from the inter-African migrants like the Southern Carmine Bee-eater to the Palearctic Migrants like the Amur Falcons and the Ruff. The number of bird species found in Hwange exceeds 400 and this is largely due to migrants that take advantage of the huge numbers of insects and favourable conditions during the wet season.

The second season in the cold and dry season starting off in about mid April and ending when the rains break in mid November. The low temperatures occur for a brief period in May/June and July and then it remains dry but get progressively warmer as the season progresses. Summer temperatures can reach into the 40s whilst winter overnight lows can be in the minuses but normally for only short periods. Hwange is on the edge of the Kalahari desert and as such we see a number of desert specialist birds in this dry period such as Sand grouse, Coursers and Nightjars.

Animals: The Dry season (from July to October) is the best time for game viewing when animals gather around predictable water resources.

Birds: Over 400 species have been recorded in Hwange which has the largest occurrence of birds in Zimbabwe.

Migratory birds are present from November to April. There are two main birding areas: the one around Main Camp and one to the north of the Park, around Robins and Sinamatella Rest Camps. Both areas are linked by a network of roads which take visitors through a variety of habitats, including many waterholes that attract large numbers of animals and birds.

Hwange experiences a mild to warm climate. The warmest months are September to March, while May to August are the coolest.
Temperatures can vary from 1 degee in winter to 45 degrees in summer, but generally average highs and lows are more moderate.
The Dry season occurs in April through October and brings fine, fair weather with plenty of blue sky.
The Wet season occurs from November to March and consists of showers in the afternoon followed by clear, sunny skies. On occasion It can remain cloudy with light showers for a few days.
Winter is regarded as the dry season and summer the wet season.
Dry season – April to October – Winter
April – Generally this is the month when the rains diminish and temperatures are falling bringing to an end the Wet season.   The evening / night time temperatures can drop rapidly and it is necessary to wrap up warmly particularly when on early morning and evening game drives.
May, June, July, August – These are essentially the winter months with temperatures rising in late August, early September.
Given there is no winter rain it is a very dry time of year and many of the waterholes which are not serviced with boreholes will dry up. The lack of water and sparseness of the vegetation generally makes it the best time for game viewing.
Daytime temperatures are around 26°C/79°F, but it gets very cold at night with average temperatures of around 7°C / 40°F.
September, October – The dry weather continues, but is broken up by the first rains which generally occur in early to mid November.
The change to the bush is almost immediate and new vegetation growth is clearly visible within a few days.
Daytime temperatures rise to 30°C+ quite quickly. October is the hottest month of the year and temperatures frequently rise to over 40°C.
Wet season – November to March – Summer
November – This brings a start to the rainy season and it is common for heavy rain to occur with plenty of thunder and lightening which makes for spectacular viewing. November remains very hot and daytime temperatures average around 32°C.
December, January & February – These are the wettest months of the year and whilst it may rain often the rain maninly occurs in the afternoons and will then clear.  It rarely lasts the whole day. Daytime temperatures average 29°C while night and early morning temperatures average 17°C.

“We have travelled all over Africa and stayed at many safari camps. The service, quality of food, and guides at this camp matched and even surpassed many 5 star properties we have stayed. The camp itself is beautiful designed (I loved the decor of the tents), with all the comforts (comfy beds, running hot/cold water, etc.) while still maintaining the charms and intimate atmosphere that comes with a small tented camp. I really think the beauty of this camp lies in it’s simplicity….“

“I could not say enough about our stay at Somalisa! The staff was wonderful! Our host Dophas made camp life so much fun and he truly put his heart into making a magical experience for our family. Our guide Robert was so knowledgeable and truly cared about creating the most FANTASTIC safari experience! All of the staff at the camp were so warm and friendly. The camp was beautiful, the food was lovely, the scenery was spectacular.”

“I spent a week…at Somalisa Expedition Camp. I would recommend it to anybody that want a true African experience with nice tents, nice food and wonderful people. They have amazing guides and the attention in the camp is wonderful, their location is unbeatable. 6 people max in their vehicles which is a must.. The tents have all the commodities:comfortable beds, flush toilets, hot water, outdoors shower which is a wonderful experience. Food is varied and it catered to everyone in the group.”

“My best friend … and I spent 5 nights here….It is a lovely tented camp on decking with all the first class luxury you could wish for in a safari camp.The hostess was very professional but very caring and had a beautiful manner. The food was delicious and I loved the traditional long safari table. It meant that we could meet all the other fabulous guests and share all our experiences of the day. We had indeed many to share as on our stay we saw leopard five times, Bubhesi the male lion 3 times and the pride of 11 lions and not to forget a glorious number of elephants”