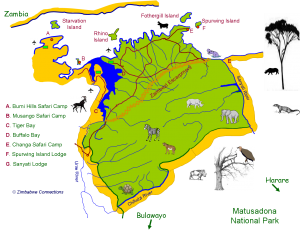 Matusadona NP can be divided into two distinct regions, the flatlands bordering the lake which occupy approximately one third of the Park and the rest which is made up of the Zambezi escarpment known as the Matusadona Mountains which rise some 700 metres above the valley floor. The park comprises some 1 400 square kilometres of diverse flora and fauna and is bounded by the Ume River to the west, the Sanyati River to the east, Lake Kariba to the north, and the Omay communal land and Matusdona Mountain range to the South. The name Matusadona derives from the local word ”Matuzviadonha” which literally means ‘constant dripping of dung’, a reference to the vast animal populations.

The Matusadona NP is truly a wonderful place to visit and relax or you can partake in a variety of activities such as guided walks, game drives, lake cruises as well as boat and canoe trips to explore the many creeks and inlets. On the shoreline there are some excellent safari lodges as well as ZIMPARKs lodges and camp sites.

Matusadona National Park is only accessible by air charter, 4 x 4 vehicle or boat. The Park lies about 20km across the lake from the town of Kariba where we can arrange a pick up. 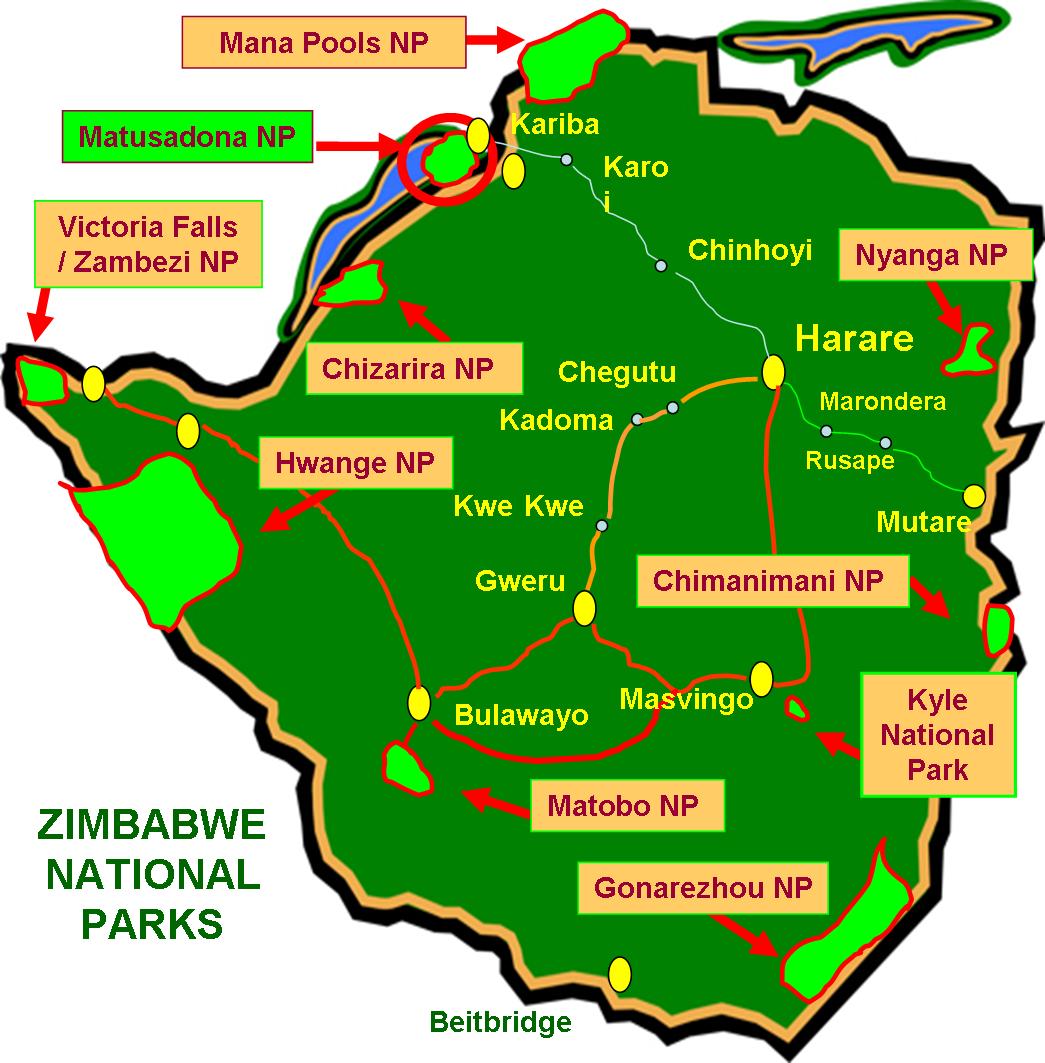 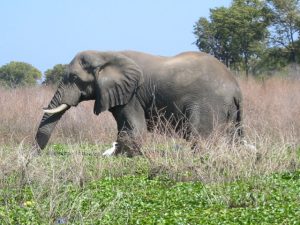 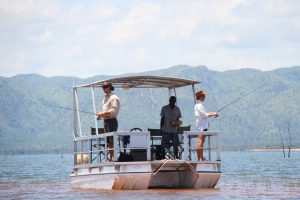 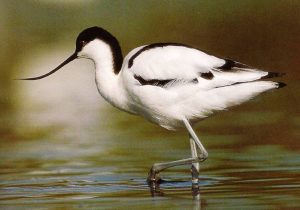 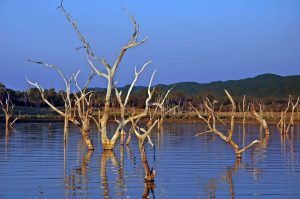 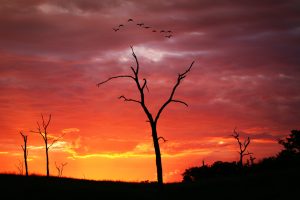 Matusadona National Park is only accessible by air charter, 4 x 4 vehicle or boat. The Park lies about 20km across the lake from the town of Kariba where we can arrange a pick up.

A small, 800 metre landing strip is available at Tashinga Camp and can take small aircraft. The strip is licensed Category II.

Visitors can come in from Bumi Hills located14 kilometres from Tashinga, or 50 kilometres across the Lake from Kariba town.

The Matusadona National Park is most easily accessible by boat from Kariba. It is also possible to enter the Matusadona from the gravel Karoi-Kamativi road south of the escarpment.

Normally the Park is reached via Karoi, but it can also be accessed from Victoria Falls, via Binga. If traveling from Karoi, 8 kilometres north of Karoi on the Harare-Chirundu Road turn left through the Hurungwe communal land. 115 kilometres from Karoi you cross the Sanyati River. You continue on the Binga Road for a further 62 kilometres and then turn right and continue for 82 kilometrs to Tashinga which is the headquarters of the Park. Except for a short distance of narrow tar, when one leaves the Harare-Chirundu Road, the roads are either gravel or dirt. The last 82 kilometres are rough and not suitable for saloon and low clearance vehicles. It is advisable to enquire about the condition of the road before starting your journey. Game viewing roads are closed during the rainy season

Matusadonha has three distinct ecological areas. First is the lake and shoreline grassland; second, the Zambezi Valley floor, a mass of thick jesse and mopane woodland, and; third, the Escarpment area of Julbernadia and Brachystegia woodlands.
The Jesse/ Mopani area is sparsely grassed, but provides habitat for browsers, most notably the black rhino. Elephants range throughout the Park, seeking the shade of the Jesse in the heat of the day.

The Escarpment rises some 700 metres above the Valley floor and is extremely rugged.

Open woodlands on the plateau behind the escarpment are dominated by Julbernardia globiflora. The mountain acacia, Brachystegia glaucescens, is also common on the slopes and ridges of the escarpment.

From the plateau the park falls abruptly to a flat, low-lying area covered mainly with Mopane scrub and woodland and with dense patches of Jesse bush.

Over the years, elephants and fire have caused the once substantial woodlands to dwindle, and in parts, grasslands have taken over. It became necessary to take control measures to control  the elephant population to a manageable size.

Numerous animals and bird species can be seen on the lake shore and within the Matusadona National Park.

There are several large colonies of darters and reed cormorants within the treelines, as well as white-breasted cormorants.

Situated at Tashinga on the lake shore. There is an ablution block with hot and cold water, showers, toilets, wash basins and baths. Firewood and braai facilities are available. Some of the camping sites have sleeping shelters.

There is a smaller camping site at Sanyati consisting of 6 sites, each with a braai stand. There is an ablution block with hot and cold water and laundry trough.

Changachirere Camping Site is an exclusive camping site that caters for one party of a maximum of 10 persons. The facility has a mini-ablution block and shelter.
Undeveloped Bush Camps:

There are also 2 totally undeveloped bush camping sites at Jenje and Kanjedza for up to a maximum of 10 persons per camp.

Visitors must be fully equipped and have a four wheel drive vehicle for this section.

Situated close to Tashinga airstrip on the east bank of the Bumi River, 55 kilometres from Kariba by boat.

Situated at Elephant Point, 44 kilometres from Kariba by boat.

Also situated on the Bumi River upstream around 300 metres beyond Ume Camp.

Other exclusive camp sites can be found at Maronga close to the Chifudzi substation and Kautsiga sited on the escarpment which is ideal for hikers and climbers.

Matusadona has a warm to hot climate. September to April makes up the warmest weather, while colder weather is present from May to August.

Sunlight often follows the afternoon rains that take place during the Wet season, from November to March, although a succession of drizzly days can also be typical. The opposite is true for the Dry season (April to October) when bright, sunlit skies are normal.

“Matusadona is a very special place and as a national park totally different to Hwange and Kruger in SA. Lake Kariba is unique which makes Matusdaona unique…just wide open spaces and wonderful anaimal sightings. Have not felt so relaxed in a long time…”

“We had not thought of going to Matusadona but it was recommended so we gave it a go…wow what a place. We had excellent accommodation and it was just all so relaxing and peaceful…must go back”

“Zimbabwe’s hidden secret…Kariba is more like a sea then a lake. What a wonderful experience. Six of us went and had an amazing time. We saw so many animals and the birds are fantastic. Great hosts, great food, very comfy accommodation great scenery…”